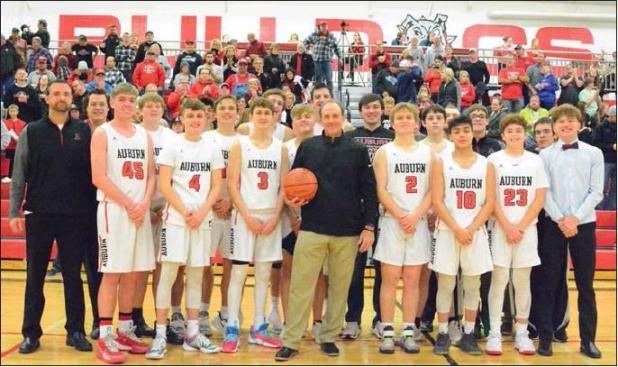 Auburn’s boys basketball team improved on their undefeated season last week with wins over Omaha Concordia and Nebraska City. The Bulldogs, heading into the week had an 8-0 record including a holiday tournament championship, while scoring 65.3 points per game and allowing only 39.7.

Leading the Bulldogs in scoring is junior point guard Cam Binder averaging 18.1 points on 46.2% shooting from the three point line along with 1.6 steals. Binder also recently scored his 1,000th point as a Bulldog in the Wayne State Holiday Tournament. Next in scoring for Auburn is senior big man Josh Lambert averaging 15.4 points with a 72.2 field goal percentage. Other leading scorers for the Bulldogs include junior Daniel Frary with 12.3 points and 6 rebounds a game, and senior CJ Hughes who averages 8 points and 3.7 assists.

On Thursday, January 9, the Bulldogs traveled to Omaha to play the Mustangs of Omaha Concordia. For Auburn, it was their leading scorers, Binder and Lambert, who got the Bulldogs out to an early 11-6 lead, scoring all 11 points between the two of them. Once Auburn’s two scoring leaders got momentum going, Auburn’s other starters stepped up, including a basket from Frary and back-to-back threes from Hughes that set the Bulldogs ahead 21-13 with just over three minutes to play in the first half.