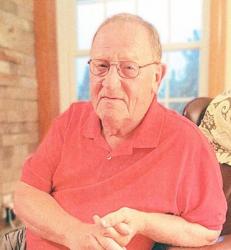 Elvin A. Shew, 73, died Saturday, June 2, 2018 at the University of Nebraska Medical Center. He was born in Council Bluffs, Iowa on Sept. 24, 1944, the son of Elvin and Elsie (Sorenson) Shew. Shew attended Glendale and Abraham Lincoln schools in the Council Bluffs area until the family moved to Auburn. He graduated from Auburn High School in 1962. In 1967 Shew was deployed to Vietnam, serving in the U.S. Navy as a signalman aboard the aircraft carrier USS Hancock until his honorable discharge in February 1969. He returned home and married Patricia Brungardt on Feb. 15, 1969. They had two children, Michael and Theresa. The family lived on North 54th Street in Omaha until Pat died in 1982. On April 9, 1983 Shew married Helen Berns Johnson–whom he met through a mutual friend who had arranged their blind date. They had two children, Timothy and Eric. Shew earned his master of science degree in civil engineering from the University of Nebraska while working at Union Pacific Railroad in the engineering and purchasing/supply departments. He was a lifelong “railroader”. Shew retired from Union Pacific in 2005. Following his retirement, Shew could often be found by the water with a rod and reel in hand, enjoying his favorite hobby, fishing. If you ever got to spend time in a boat fishing for walleye with Shew, you were truly blessed. His love of the sport led him to serve as a volunteer for the Nebraska Game and Parks Commission’s Hooked For Life, Kids Gone Fish’n’ program. Shew also loved spending time with his family and relished his role as a grandfather to Kyle, Adam, Esme’ and Daphne. He had a true passion for people. Shew loved long visits and good conversations, making everyone he interacted with feel special. It was rare to find him without a smile on his face–his laugh was infectious and nothing could turn a gray day around like one of his legendary hugs. Shew was diagnosed with Alzheimer’s in 2016. He maintained his wonderful personality throughout his illness and for this his family is grateful for answered prayers. A special thank you to the Alzheimer’s Association for their knowledge and guidance. Surviving are his wife, Helen; sons Mike, Tim (Brigette) and Eric; daughter Theresa Lankford (Matt); grandchildren Kyle, Adam, Esme and Daphne; sister Jackie Obermeyer (Daryl); nieces and nephews; and other relatives and many friends. Shew was preceded by his wife Patricia (Brungardt) Shew and a sister Susan Hallock. Mass of Christian Burial was Thursday, June 7 at St. John Catholic Church on the Creighton University campus in Omaha. Interment was at Calvary Cemetery with military honors. Memorials to Alzheimer’s Association or Nebraska Game and Parks Commission. Arrangements were by Heafey-Hoffmann-Dworak and Cutler Mortuaries–West Center Chapel.