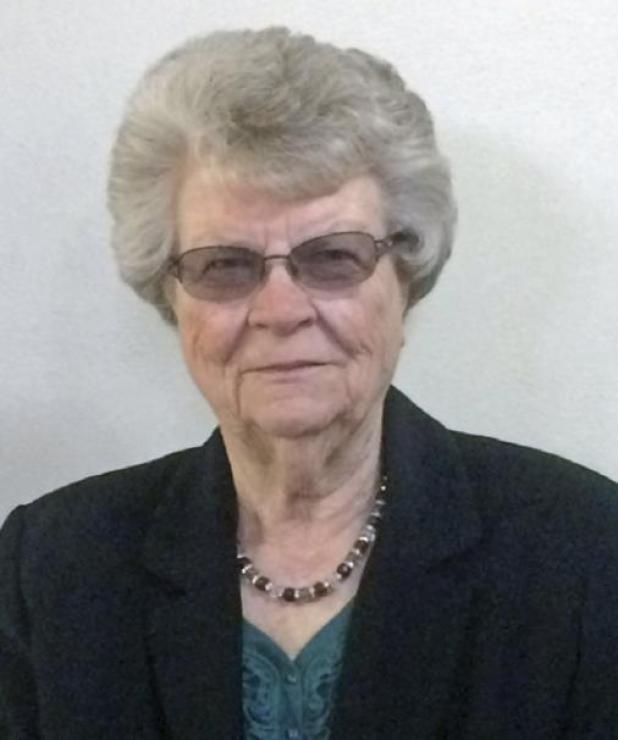 Dolores Ann Grotrian, one of five children of Harm and Evalene (Sargent) Harms, was born October 2, 1936, in Sterling, Nebraska. She was baptized January 31, 1937, at St. John Lutheran Church in Sterling. Dolores attended school in Sterling, where she graduated from high school.

On August 14, 1955, Dolores was united in marriage to Paul C. Grotrian at St. John’s Lutheran Church in Sterling. They made their home near Talmage, Nebraska and were blessed with five children: Arlen, Lori, Linda, Jim, and Kathy.

Dolores and Paul and family moved to the farm near Johnson in 1971.

Dolores was the ultimate farm wife. In addition to preparing lunches and other food she could often be found helping with chores and loved driving the grain truck during harvest.

She played organ at Zion Lutheran for over 40 years and enjoyed painting and card club. Dolores was happy when she was mowing or working with her flowers or vegetable garden. She enjoyed coffee with her many friends and loved spending time with her grandkids and great grandkids.

Paul passed away on October 1, 2017, and Dolores moved into Johnson in 2018. As her health deemed necessary, she became a resident of Long’s Creek Assisted Living in Auburn, Nebraska in February of 2019 and moved to Good Samaritan Society-Auburn in November that year. She enjoyed making new friends at all of her new homes.

With family around her, Dolores passed away at Good Sam in Auburn on Thursday, November 4, 2021, at the age of 85 years, 1 month, and 2 days. In addition to her husband Paul, Dolores was preceded in death by her daughter Kathryn, sister Donna Gadeken, son-in-law Stanley Post, brothers-in-law Kenny Gadeken and Ervin Hansen, brother Larry Harms, parents Harm and Evalene Harms, and parents-in-law Carl and Leona (Brehm) Grotrian.