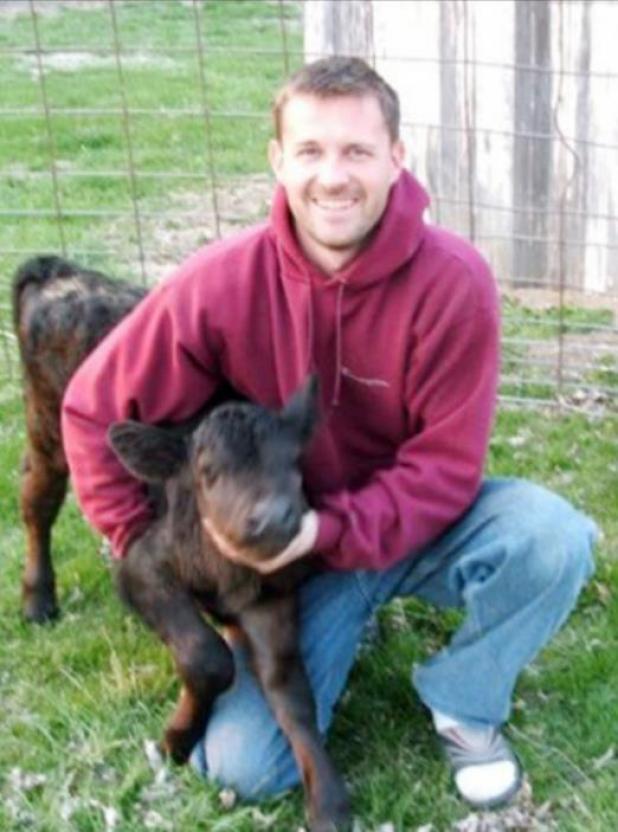 Terry Lynn McMann, 44, of rural Table Rock, Nebraska was born on November 7, 1976, at the Nemaha County Hospital in Auburn, Nebraska to Roger and Linda (Volkman) McMann. He was baptized at St. Paul’s Lutheran Church in Auburn and later confirmed at Faith Lutheran Church in Humboldt. Terry attended school in Humboldt and graduated from Humboldt High School with the class of 1995.

While attending high school, he excelled in football, basketball and track. Terry won the Class D 100-meter state championship in 1995 and finished second in All Class behind Ahman Green. He was also the anchor man on Humboldt’s state championship 400-meter relay team that year. Terry rushed for over 1,000 yards his senior year in football and scored 28 touchdowns over his football career for the Cardinals. He was also Homecoming King his senior year and an attendant at the Richardson County Fair. After graduation, Terry furthered his education by attending Southeast Community College in Milford, Neb. where he received a degree in parts management. On January 23, 1997, Terry entered active duty in Omaha, Nebraska in the U.S. Army and served his country until being honorably discharged as Sergeant on December 14, 2004, while stationed at Fort Riley, Kansas.

After his military service, Terry returned to Humboldt where he worked for the City of Humboldt for nearly 15 years and later worked for Pawnee County Bridge and Road Crew —all while farming. He was a farmer at heart. Terry and Natalie (nee Helmick) began building their life together in 2007, and to this union a son was born on October 15, 2012. Terry was a loving father and husband who dedicated his life to his son, wife and family. He truly enjoyed participating in tractor pulls, deer hunting, camping and farming. Terry’s greatest joy was being with his family.

Terry passed away on Thursday, February 4, 2021, at his farm in rural Table Rock having reached the earthly age of 44 years, two months and 28 days. He is preceded in death by his paternal grandparents Woodrow and Margaret McMann and his maternal grandparents Rudy and Luella Volkman.

A Celebration of Terry’s Life will be held at 2 p.m. on Thursday, February 18, 2021, at the Ag Building, 1034 4th street in Humboldt with Pastor Tim Llewellyn officiating. A livestream of services will be available on the Wherry Mortuary/ Monument Facebook page for those not attending services and a live radio broadcast will be available on 88.7 FM for those wishing to remain in their vehicles. Masks will be required for all those in attendance. A Family Prayer Service will be held prior to the celebration at 12:30 p.m. at the Ag Building.

Visitation will be from 9 a.m.-8 p.m. on Wednesday, February 17, 2021, at the Wherry Mortuary, 207 N. Nemaha Street in Humboldt. Family will greet friends from 5-7 p.m. at the mortuary with masks and social distancing required for those attending.

Interment will follow services at the Humboldt Cemetery with full military honors conducted by the Nebraska Army Honor Guard and the Harvey-Mann Legion Post #269.

In lieu of flowers, memorials contributions may be given to the Bryson McMann Scholarship Fund. All donations can be mailed or dropped off at any State Bank of Table Rock location.

Condolences can be shared online at www.wherrymortuary.com