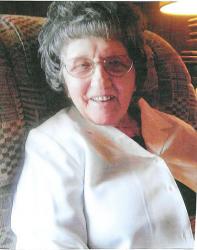 Sylvia Anna (Dvorak) Anderson, 92, of Humboldt, Nebraska was born on September 19, 1925 in Pawnee City to Frank and Anna (Kozler) Dvorak. She was the second oldest of three children, having an older brother Otto and a younger brother Arnold. Sylvia attended District 31 grade school near Pawnee City, Nebr., where she won several penmanship awards for her writing. She graduated from Pawnee City High School in 1944, participating in band and glee club. After graduation, Sylvia helped on the family farm. She met her future husband Carol Anderson at a dance at the ZCBJ Hall near DuBois, Nebraska. Carol and Sylvia were married on June 25, 1951 at the home of the late Rev. and Mrs. Ward Merritt. Rev Merritt performed the double ring ceremony. They were married for 66 years. The couple made their home on a farm northeast of Humboldt. To this union two children were born, Judy and Jerry. Sylvia enjoyed being a farm wife and homemaker. She helped with farm chores, loved her cats, raised chickens, had large gardens, and also worked up produce from the family orchard. Sylvia loved her children and supported them in their careers, Judy-teaching and Jerry-farming. She also adored her grandson Shawn Anthony Anderson and enjoyed the short time she had with him. Sylvia loved her Czech heritage and spoke the Czech language. She loved music-polka music, hymns, patriotic (Star Spangled Banner), waltzes and music of Lawrence Welk. Sylvia also enjoyed reading, particularly the newspaper and recipe books, cooking, baking, canning and watching game shows. She also was an avid Husker fan. Sylvia was a member of the Southeast Nebr. Quad County Porkettes and an 80 plus year member of the District 2 ZCBJ Lodge of DuBois, NE. Carol and Sylvia were honorary FFA Chapter Farmers in 1976, were recognized as Aksarben Pioneer Family Award winners also in 1976 and received the local Conservation Award for excellence in soil conservation work in 1985. Sylvia was a Christian, having accepted Jesus as her Savior. She had attended the Christian Church in Humboldt. Sylvia will be missed by many friends, neighbors, and family. Sylvia entered Colonial Acres Nursing Home in January of 2018 and passed away there on Monday, April 16, 2018 having reached the age of 92 years, six months, and 28 days. She was preceded in death by her parents, brother Otto Dvorak and brother-in-law, Merwin Anderson and his wife Jeanne Anderson. Sylvia is survived by her loving husband Carol of rural Humboldt; children, Judy Anderson of Omaha and Jerry Anderson of Auburn; brother, Arnold Dvorak of Pawnee City and his good friend Nancy Bergsten; grandson, Shawn Anthony Anderson of Auburn; nephew, David Anderson of Prairie Village, Kansas; niece, Patty Brasel of Leawood, Kan.; great nephew Ben Brasel of Kansas City, Kan.; great niece Meryl May of Lawrence, Kan.; five great-great-nieces and nephews of Lawrence, Kan. and Kansas City, Kan.; and many other relatives and friends. A Celebration of Life will be held at 2 p.m. on Friday, April 20, 2018, at The Christian Church in Humboldt, with Pastor Howard Blecha officiating. Visitation will be held from 9 a.m.-8 p.m. on Thursday, April 19, 2018, at The Wherry Mortuary in Humboldt, Nebraska. Family will greet friends from 6-8 p.m. at the mortuary. Interment will be in the Humboldt Cemetery, Humboldt, Nebraska. Memorials contributions are suggested to family’s choice with a later designation. Online condolences can be sent to www.wherrymortuary.com. Wherry Mortuary-207 N. Nemaha ST.- Humboldt, Nebraska (402) 862-2915