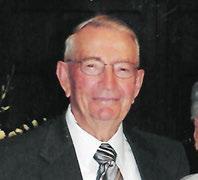 Myron W. Leech was born on December 13, 1922 in Richardson County, Nebraska on his parent’s home place. He passed into the loving arms of Jesus on April 19, 2018 at Colonial Acres Nursing Home where he had lived since August 5, 2017. Myron graduated from the first consolidated school in the state of Nebraska, Bratton Union with the class of 1940. Following graduation, he took an agricultural short course at the University of Nebraska-Lincoln. Myron began his farming career with his father and brother, raising crops and feeding cattle and hogs. For many years, Myron was involved in community affairs. He served on three school boards, Rural District #100, Bratton Union and the Humboldt School Board. He saw many changes in the education system and had served on a Richardson County School Reorganization Committee in the early 70’s. In September of 2017, the Myron Leech family was honored by Aksarben for owning the family farm for 100 years. Grandson Jeremy and family live where Myron and Imogene lived while son Van and wife Kay live on the original Leech home place. On February 22, 1946, Myron married his wife Imogene Oursland. Shortly after their marriage, he served with the Army’s Medic Division spending most of his service time in Madigan General Hospital in Washington State. To this union, two sons were born, Terry Leech of Nebraska City and Van Leech of Humboldt. Myron was civic minded and he along with Imogene, opened Leech Insurance Agency in 1972 and Leech’s Department Store in 1975. The agency was sold to Van and Kay in 1995. The department store was closed in 1996 due to Imogene’s poor health. When Imogene passed away after nearly 60 years of marriage, Myron was united in marriage to Jo Ann Tupa. They celebrated their 11th wedding anniversary in October of 2017. Myron and Jo Ann are members of the United Methodist Church of Humboldt. Myron was a man of strong faith. He loved the Lord, his family and his friends. He was a man who worked the earth and greatly enjoyed being a farmer. His grandchildren have many fond memories of spending time with grandpa. He was blessed to live long enough to meet seven great grandchildren and he treasured visits with family and friends. Myron was crowned king of the Richardson County Fair in 1993. Myron is preceded in death by his wife Imogene, his parents, William and Trena Leech, sister and brotherin- law, Erma and Charles Reid and brother Omer Leech. He is survived by his loving wife, Jo Ann Leech, sons, Terry Leech and wife Jerri of Nebraska City and Van Leech and wife Kay of Humboldt; three grandchildren, Jeremy Leech and wife Laura and children Jacey, Brandt and Colt of Humboldt, Zach Leech and wife Nichole and children Gavin and Alex of Johnston, Iowa and Kylei Kenny and husband Gary of Valley Cottage, N.Y. and children Jax and Rilo, sister-in-law, Harriett Leech of Humboldt, step-grandchildren, Dickie Blecha and wife Sandy of Humboldt, Bridget Hamilton and husband Denny and children Reese, Raygan and Flynn of Jefferson City, Missouri and Kirby Bohl and wife Ann and children Zayden and Ali of Nebraska City, Jo Ann’s children, Marsha Esslinger and husband Francis of Belleville, Kan., Wanda Hartshorn and husband Del of Humboldt, Barb McCarter and husband Rich of Topeka, Kan., Mike Tupa of Abilene, Kan., Jeri Armstrong of Abilene, Texas, and Sharon Streit and husband Mel of Humboldt, several nieces and nephews along with special friends Joe and Melba Cook. A Celebration of Life Service was held Tuesday, April 24, 2018 at the United Methodist Church in Humboldt, with Pastor Dorothy Smith officiating. Inurnment was in the Pleasant View Cemetery north of Humboldt. Memorials contributions may go to the Humboldt United Methodist Church, Humboldt Volunteer Fire Department or Ambulance Squad, and the Pleasant View Cemetery Fund. Condolences may be shared online at www.wherrymortuary.com. Services were entrusted to Wherry Mortuary, Humboldt, Nebraska.