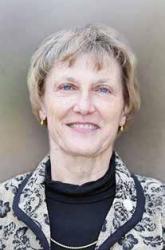 Loree Lynn (Gerdes) Bykerk, 69, of Omaha, Nebraska was born on September 26, 1947, in Nemaha County, Neb. to Harold Thomas and Laura (Behrends) Gerdes. She was baptized on December 1, 1947 and confirmed on May 28, 1961 at St. John’s (Stone) Lutheran Church south of Auburn, Neb. Loree attended Muddy School District 41 and later graduated from Bratton Union High School with the Class of 1965. She received a BA from University of Nebraska-Lincoln. After graduating, Loree attended Columbia University, obtaining her Master’s and Ph.D. in Political Science.

On June 1, 1969, Loree was united in marriage to Cecil Bykerk at St. John’s Lutheran Church. To this union, two children—Andrea and Jean— were born. The couple moved to their present home in Omaha in 1989. Loree taught Political Science at the University of Nebraska at Omaha for over 32 years before retiring in 2013. After retiring she became a master gardener, which was always her dream. She loved volunteering, gardening, quilting, and spending time with her grandchildren.

She was diagnosed with stage four lung cancer almost 9 years ago. She still continued to teach for several more years, her greatest love. She was also able to welcome three grandsons into the world and complete various sewing projects for them as well as spending time reading to them. Loree died at her home in Omaha on November 30, 2016 after having been surrounded by her family throughout her last few days. Numerous tributes to her have been received, some of which are remarkable in regards to how she changed lives.

She was preceded in death by her parents; her sisters, Lola Mehlin and Donna Volker, and brothers, Milburn and Lindell Gerdes.

In lieu of flowers, the family requests that memorials be directed to the Loree Bykerk Scholarship Fund for UNO Political Science students at the University of Nebraska Foundation, 1010 Lincoln Mall, Suite 300, Lincoln, NE 68508.