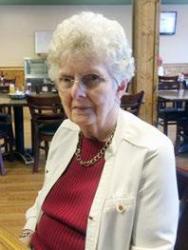 Eleanor (McMullen) Hill, 86, formerly of Stella, Nebraska was born on July 22, 1931 in Shubert, Nebraska to Richard A. and Jessamine H. (Hinds) McMullen. She grew up in the Stella area where she attended school. On September 30, 1951, Eleanor was united in marriage to Carl Hill in Stella, Nebraska. The couple moved to Lincoln and lived there until 1956 when they moved back to the Stella area. Eleanor attended Peru State College where she graduated with a degree in teaching. Eleanor managed and taught at a preschool for years. She was a member of the Stella Community Church, Eastern Star, Stella Research Club, and a member of the Daughter’s of American Revolution. Her hobbies included needle point and craftwork. Eleanor became a resident of the Goldcrest Retirement Center in Adams, Nebraska later in life when her health began to decline. Eleanor passed away on Thursday, July 12, 2018, at the Goldcrest Retirement Center in Adams, Nebraska having reached the earthly age of 86 years, 11 months, and 20 days. She was preceded in death by parents, son Philip Hill, a sister Mary Burton, and great-grandson Lane Dixon. Eleanor is survived by her husband Carl Hill of Stella; daughters: Becky Jobman of Adams; Betsy Marquardt and husband Bruce of Julesburg, Colo.; son Dan Hill of Stella; grandchildren: Danielle White of Lincoln, Neb.; Jessica Dixon and husband Zach of Adams; Tanner Hill of Lincoln; great-grandchildren: Delaney and Logan White of Lincoln; Zeva and Jase Dixon of Adams, Neb.; a brother Andy McMullen and wife Jan of Stella; brother-in-law Thomas Burton of Falls City, Neb.; and many other relatives and friends. A Celebration of Life was held on Monday, July 16, 2018, at The Stella Community Church in Stella, with Pastor John States officiating. Inurnment followed the services at the Prairie Union Cemetery in rural Shubert. Memorial contributions may be given to the Stella Community Church or Goldcrest Retirement Center in Adams. Condolences can be shared online at www.hallfuneral.net Services were entrusted to Hall Funeral Home — 707 15th Street — Auburn, Nebraska 68305; (402) 274-3131.